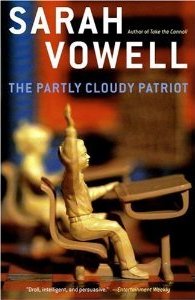 As someone who is not a history buff at all, I was hesitant to pick up The Partly Cloudy Patriot.  But at the urges of my best friend, I gave it a shot, and I am so glad that I did.  Sarah Vowell makes her nerdiness wholly endearing in this series of humorous essays with topics ranging from the Salem Witch Trials to Buffy the Vampire Slayer to the 2000 election of George W. Bush.  Vowell fully embraces her nerdiness, especially when describing her “nerd voice” and her various vacations to (often depressing) historical landmarks.  Though I always found myself bored in history class, Vowell’s book taught me some things I didn’t know all while making me laugh.  She makes the information simultaneously humorous and personal; one of my favorite chapters was about Al Gore speaking to a group of high school students and having his remarks taken wildly out of context by the media, changing his message of hope into something egotistical.  Not all her stories are aimed at those interested in politics and history; she also has some gems about how to deal with her parents visiting  for the holidays and her fear of Tom Cruise.

Just for a taste of her dry wit, here’s one of my favorite passages:  “I was enjoying a chocolatey cafe mocha when it occurred to me that to drink a mocha is to gulp down the entire history of the New World. From the Spanish exportation of Aztec cacao, and the Dutch invention of the chemical process for making cocoa, on down to the capitalist empire of Hershey, PA, and the lifestyle marketing of Seattle’s Starbucks, the modern mocha is a bittersweet concoction of imperialism, genocide, invention, and consumerism served with whipped cream on top. No wonder it costs so much.”

Bad Behavior has blocked 1615 access attempts in the last 7 days.