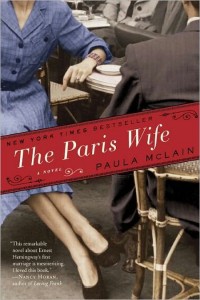 I went into reading The Paris Wife by Paula McLain with a blank slate.  I had never read any of Ernest Hemingway’s novels, and I knew only the bare minimum of biographical information about his life.  This book is a fictionalized account of Hemingway’s first wife Hadley.  It details all of the highs and lows of their complicated relationship, from their first meeting in Chicago in 1920 and subsequent whirlwind marriage to their years of living in Paris and the unraveling of their once happy life together.  Their lives seem glamorous on the surface: spending time with the Fitzgeralds and Gertrude Stein, writing in chic Paris cafes, and taking extended vacations to exotic locales around Europe.  But boiling below the surface is a host of problems.  As attentive and accommodating as Hadley tries to be, she simply cannot contend with Ernest’s ambition, neediness, and thirst for the drink.

The story is told through Hadley’s point of view.  She grew up in a very different setting, much more conservative and traditional than the Jazz Age Paris of the 1920s, so we’re learning about this time and place through brand new eyes.  The writing is lovely and McLain is very successful in making the time period come alive.  Plus, the English major in me got giddy every time a different historical figure popped up in the story.  I actually listened to the audio version of The Paris Wife and it was very well done.  Even though anyone who knows even a little bit about Hemingway has an idea of how this story ends, it’s still a compelling and engaging read that I would recommend to fans of historical fiction, novels about love and marriage, and Ernest Hemingway.

Bad Behavior has blocked 1472 access attempts in the last 7 days.