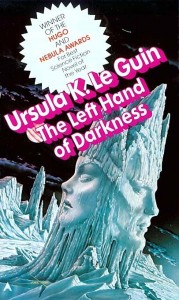 At a wedding I attended recently, I ended up having a long, open-bar-fueled argument with another guest over our favorite speculative fiction books. She loves Robert Jordan; I love George R.R. Martin. I won’t bore you with the details, but I do want to emphasize how vehemently opposed our tastes were, so that when I tell you that we both adored The Left Hand of Darkness, you’ll know: wow. that must be a seriously awesome book.

And it really, really is. This is about as pure sci-fi as sci-fi can get: a tale of fiction that speculates on the future of science and how it may alter human culture. And, in this book, even human genetics.

The story takes place on the planet Gethen, mostly known as Winter, where Genly Ai has been assigned as a diplomat. His mission is to bring the people of Winter into the broader galactic civilization. His task is complicated by the alien culture and politics of this world, where the human inhabitants are genderless beings whose sexual characteristics and reproductive abilities only surface during mating seasons, when they can become either male or female (depending on their chosen partner). LeGuin is a master: this novel is excellent. It’s not about aliens, or sex, or politics, but it is about the way all of those things affect friendship, culture, and human nature. Like all great science fiction, this isn’t a work with a limited scope or audience – it’s one that uses speculation about the future to make sharp observations and thoughtful arguments about the way we live now.