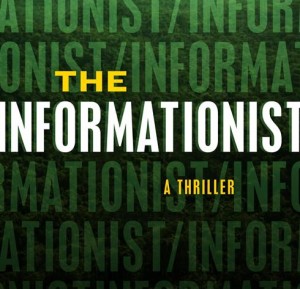 Have you zipped through Stieg Larsson’s Millennium series? Are you looking for a heroine as tough and scarred as  Lisbeth Salander? Well, look no further.

The titular Informationist, Munroe (aka Michael and Victoria) is a very high-priced gun-for-hire. Because of her facility with languages and insight into the politics and economics of other countries, she acts as a quasi-spy/private eye for governments and corporations.  She grew up in Cameroon, the daughter of missionaries, and rebelled against their religion and neglectful parenting, by going to work for a local cartel of criminals. There she learns many survival skills, useful in her current line of work.

The most interesting aspect of the book are the settings of Equatorial  Guinea and Cameroon. Munroe and her minder navigate the bureaucracy, politics and culture of these countries trying to find the daughter of a billionaire oilman.

Her job as an “informationist,” is to get the information her employer requests. In this case, whether the missing girl, Emily, is dead or alive. Such a remote part of the world is fascinatingly revealed – the climate, history, and customs are incorporated naturally into the story. The pages nearly drip with the heat and humidity.

The author herself grew up  very non-traditionally, in a “communal apocalyptic cult,” as she says. It wasn’t till she was in her twenties that she escaped. The cult traveled all over the world, including West Central Africa, which accounts for her gifted depiction of this area.

I wouldn’t be surprised if there was a series of Victoria Munroe books in the near future.