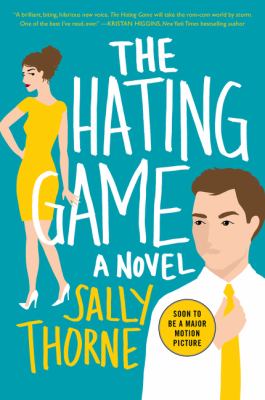 Sometimes I am overcome with the urge to walk the shelves and immerse myself in books. It centers me, lets me interact more with patrons, and also check the condition of books. With the recent closure of the Library to patrons, I found myself searching for books that I remembered patrons telling me to read. Up popped The Hating Game by Sally Thorne. Thorne was mentioned to me by a regular who thought I would enjoy a contemporary romance. She was right!

The Hating Game by Sally Thorne tells the story of two publishing companies, Gamin Publishing and Bexley Books, that are forced to merge in order to survive, as well as the people affected by this merger. Lucy Hutton and Joshua Templeton find themselves squaring off a daily basis as a direct result of this. Lucy and Joshua are executive assistants to the co-CEOs of the newly merged publishing company. The two are not friends, to put it nicely. They may have similar jobs, but that doesn’t mean they have to like each other. In fact, Lucy and Joshua hate each other and they aren’t shy about saying so. They show their feelings through passive aggressive games they play throughout the day, constantly working to frustrate and intimidate each other.

This status quo of hate and frustration continues on until their bosses announce a new job opening in the company. Lucy and Joshua are both put up for the promotion that will result in one being the other’s boss. Things couldn’t get worse. Even more consumed with beating the other, tensions rise until their dynamic abruptly shifts with an unexpected kiss. Both up for promotion, this high-stakes game of professional sabotage ratchets up as the two struggle with whether or not the feelings they have for each other are real or if this is instead another game.

I found The Hating Game to be serious, sharp, funny, full of happiness, and chock full of delicious chemistry and tender moments. This office romance about two sworn enemies had me hooked from the beginning and hoping that the two would end up together. Give this book a read (or a listen) and let me know what you thought about it in the comments below.

According to author Sally Thorne’s website, The Hating Game is being made into a movie starring Lucy Hale, Robbie Amell, and Gina Torres as revealed in 2019. Hopefully that comes to fruition!