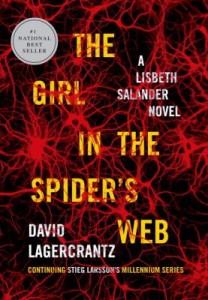 The Girl in the Spider’s Web is the fourth and latest installment in the Swedish Millennium series. Fans assumed that the series was finished as the series’ author, Stieg Larsson, had passed away with only writing the three books. But alas, the series has been revived by Swedish journalist and author David Lagercrantz. Let us rejoice!

Langercrantz does a fantastic job on many levels. He keeps the focus on Salander and her past, but develops the story into a plausible continuation for the series. Salander shines, finally living up to her full potential. She is a true heroine. More characters, unique in their own right, are introduced, and a slew of old ones are weaved in. Blomkvist is constantly on his game and devoted more than ever to helping Lisbeth. The story is fast paced and contains plenty of suspense, intrigue, computer hacking, and mathematical equations that only a handful of people in the world can understand. The best part is that it is clear that Langercrantz will not stop here. The door has been left wide open for the next Lisbeth Salander adventure.

If you are looking to start a new series, give this one a try. I have found it is more enjoyable and easier to follow the Swedish names and genius jargon when I listen to the audio books. Simon Vance is the reader of this series and really brings the story life. The first book in the series is The Girl with the Dragon Tattoo. This book exploded and was even made into a movie in the United States in 2011 starring Daniel Craig as Mikael Blomvkist. Sweden has made the first three books into movies and those are all available on Netflix.