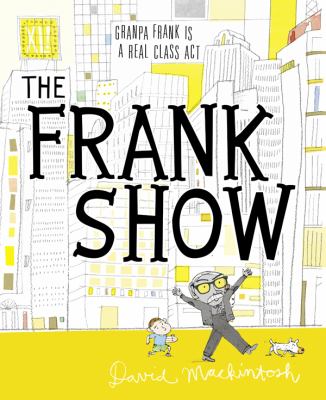 Grandpa Frank is just a grandpa and he doesn’t seem to like anything (except pickled onions), so how could his grandson possibly talk for a whole minute about him in front of his entire class?

In The Frank Show by David Mackintosh, Frank’s grandson is nervous about presenting about his curmudgeon grandfather during show and tell.  Especially since his friends have exciting people to introduce, like Fay’s cousin who “tells you if your bag is too heavy at the airport” and Hugo’s stepbrother who’s sports car has an eight-ball gearshift knob.

The Frank Show is the perfect example of a picture book that seems to have been written more for adults than for kids. I see the jokes flying right over younger kid’s heads, and not many children are going to spot Edgar Allen Poe and his raven in the illustrations. But that doesn’t mean that I don’t recommend this book — because it is fantastic.  Mackintosh’s illustrations are funny and child-like, filled with subtle references and jokes. This story is as much about the generational divide as it is about taking people for granted — both topics rarely explored in picture books. Grandpa Frank’s exaggerated stories and cranky advise are entertaining, and his grandson’s fears are completely understandable. Seriously, pick up this book. You won’t be disappointed, unless you’re Frank. I’m sure he’d say that they don’t make them like they used to or something as equally crotchety.

Bad Behavior has blocked 2341 access attempts in the last 7 days.