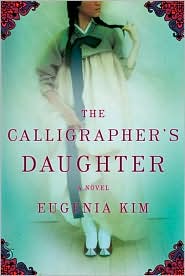 Inspired by the life of the author’s Korean mother, this first novel by Eugenia Kim is a beautiful and satisfying story.  The Calligrapher’s Daughter spans 30 years of Korean history, from 1915-1945, and is narrated by najin Han, the daughter of an ultra-traditional and aristocratic calligrapher.  Born in 1910 at the beginning of the Japanese occupation of Korea, her life, through privileged, is restricted by strict social standards, including a very limited education for women.  When her father decides to marry her off at age 14, her mother bravely defies him by sending her instead to Seoul, where she serves as a companion to the young Princess Deokhye during the waning days of the centuries-old dynasty.

Later, Najin attends college and works as a teacher and school principal.  When her parents again choose a husband for her, she is pleasantly surprised to find that she concurs with their choice of Calvin Cho, who is leaving to study for the ministry in America.  However, only one day after her wedding, she is denied a passport.  An entire decade passes, separated from her husband with little hope for reunion, as she struggles to survive the hardships and poverty brought on by World War II.  Both lyrical and tragic, this novel celebrates the perseverance and strength of women — a thoroughly enjoyable coming-of-age saga.

Bad Behavior has blocked 1213 access attempts in the last 7 days.