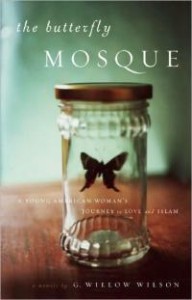 The Butterfly Mosque by G. Willow Wilson is the memoir of a young woman who makes the life-changing decision to abandon atheism and convert to Islam.  After being offered a teaching position at the Language School, Wilson moves to Cairo, Egypt, where she experiences what it is really like to be a Muslim woman in a Middle Eastern country.  Here she quickly discovers that she must learn all over again how to do simple things like greet someone and shop for groceries.  Her life takes an unexpected turn when she meets Omar, who defies the stereotypes of Muslim men she has always heard about.  As Omar teaches Willow how to get by in this new environment, the two fall in love and embark upon a new journey where two cultures come together and learn to relate to one another.

I absolutely loved this book.  I was a Religion major in college, so I had a little background knowledge of Islam, but I learned so much more about it from reading an actual Muslim woman’s perspective.  It was incredibly enlightening to learn about what it’s like for a real Muslim woman in the Middle East, rather than just focusing on the often sad images we see on the news.  Despite being in a place so different from where we live, the story is still relatable, and the author takes care to always explain Arabic words and cultural concepts to the reader.  If you’re interested in learning about about Islam but want something that reads like a novel rather than a textbook, I highly recommend The Butterfly Mosque.