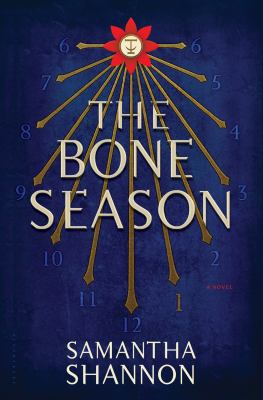 I read a lot about The Bone Season before I started reading the book, which means that I read a lot about the book’s author, Samantha Shannon.  A twenty-one year old recent graduate from Oxford University, Shannon has been marketed as a literary wunderkind. Every interview and review mentions her age or her status as a “young writer”.  As a first-time published author, that is to be expected (here I am doing the same), and I would be lying if I didn’t say that influenced my decision to pick it up.

But this novel stands on its own (well, at least until the next six books in the series are released.)  Shannon has created a fascinating near-future paranormal fantasy novel that includes elements of revisionist history and dystopian science fiction.  Set in Scion controlled London in 2059, this fast-paced novel introduces readers to Paige Mahoney, a member of the clairvoyant criminal underworld.  Scion was formed to find and eliminate clairvoyants like Paige, so being a member of Jaxon Hall’s Seven Dials based gang keeps her a protected and fed member of a family.  But when Paige commits a crime that leads to her arrest and capture, she finds herself in Sheol I, a penal colony for voyants run by Rephaim, a race of non-human clairvoyants.  While in Sheol I, Paige is assigned to the Warden for training and care and she has to decide if she can trust him, as she tries to find a way to save herself and the other humans imprisoned for life in Sheol I.

Shannon has been called the next J.K. Rowling (pressure anyone?) and The Bone Season has been compared to the Harry Potter series and The Hunger Games series.  I understand why, and I would recommend that fans of both series check out The Bone Season.  But I think that while there are elements of each in this book (magical powers, dystopian future, strong female protagonist), Shannon has created something different.  She has said that she was influenced by Margaret Atwood, and this is apparent in her intelligent, literary take on urban fantasy.  This might be my favorite read this year (but there are two more months to go, so don’t hold me to that.)

Bad Behavior has blocked 1304 access attempts in the last 7 days.