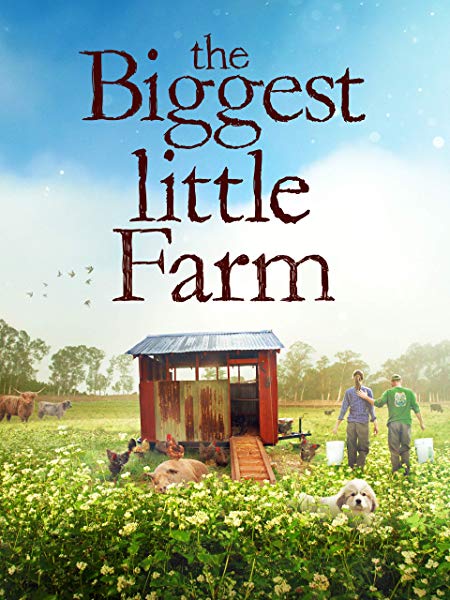 The Biggest Little Farm documentary follows John and Molly Chester as they transition from L.A. apartment dwellers with cool jobs to organic and biodynamic agriculture farmers. He is a filmmaker and she was a personal chef and food blogger. Molly continues to blog and has written a traditional foods cookbook. This beautifully touching story unfolds in a captivating manner and has breathtaking camera shots that had me wondering how John achieved them.

The story’s main characters include John, Molly, a rescued dog named Todd, a regenerative agriculture guru named Alan York, Emma the pig, their son Beauden, and the living, breathing, 210 acre farm north of Los Angeles. The film opens with a wildfire quickly approaching the farm. We come to realize how utterly catastrophic this would be as we view footage of hundreds of animals and thousands of fruit trees. They close the film by bringing the story back to the fire as we find out what happened.

I’m guessing that much acreage near Los Angeles had to have cost more than they personally invested or garnered in contributions from their friends but financial details weren’t addressed. Alan guided them through the steps necessary to regenerate the overused, unhealthy soil to basically build a thriving ecosystem that could be somewhat self-sustaining. Somewhat is the operative word. It was heart wrenching to see one problem after another crop up after so much effort. It was equally heartwarming to see them find a solution to a problem right before them, like using existing organisms as natural control for a pest infestation with some modifications in their structure or practices.

I felt the young couple’s exhaustion and thrills along with them since I’m trying to use regenerative practices (no till, composting, rain garden, using predatory insects for pest control) in my gardens and yard with difficulties that now seem almost trivial. It was honestly difficult to understand how they tackled such a large project in such a short amount of time. I can’t imagine they slept much for a few years. Although they didn’t mention the name of the organization from which the volunteers were recruited, I believe they may have been from WWOOF, World Wide Opportunities on Organic Farms.

This documentary is as honest as one can get within the short span of a film. The adorable opening animated sequence highlights Molly’s optimistic outlook on what she pictures the farm to be. The reality is much harsher but the rewards are literally life-changing for them, their employees and volunteers, vegetation, soil microbes, and carbon sequestration for the planet’s overall health. I know they’ll continue to experience problems with pests, predators, weather, and climate change but it looks like they’ll be able to handle whatever comes their way.

Bad Behavior has blocked 1519 access attempts in the last 7 days.