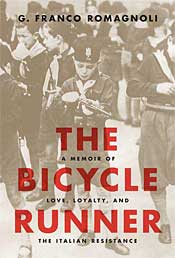 Like all boys growing up in Rome during the 1930’s and 40’s, the author was expected to join Balilla, Mussolini’s Fascist Youth Organization in Italy.  An unwilling participant, he counters this activity by becoming a bicycle runner, secretly delivering pamphlets and other materials to members of the Resistance.  Later, near the end of the war, after Italy has surrendered to the Allies but is still controlled by a puppet German government, Romagnoli flees Rome to avoid military conscription.  Hiding in the remote mountainous countryside, he becomes even more dangerously involved in the Resistance, working with both American and British soldiers.

But The Bicycle Runner, which covers his life from ages 14-25, is much more than a war story.  In fact, it reads much more like a coming-of-age novel, full of the usual adolescent angst weaved together with plenty of humorous anecdotes.  Examples include his descriptions of fearful confessions to the local priest (which the entire congregation can hear)  to his first experiences with love and lust.

The author may be better known for co-hosting the first American television program on Italian cooking, The Romagnoli’s Table, for which he  coauthored two companion books.  Though he passed away in December of 2008, the love for his native land and culture comes through strikingly clear;  the subtitle, A Memoir of Love, Loyalty and the Italian Resistance, is perfectly appropriate.

Bad Behavior has blocked 1632 access attempts in the last 7 days.