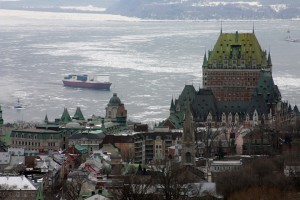 Louise Penny , a former  Canadian Broadcasting Corporation reporter, steeps her mysteries in the French culture of Quebec. Her Chief Inspector Gamache  series has been compared to Agatha Christie (a small village setting and large cast of characters and  surprise endings) .  In Brutal Telling, Gamache is called in when an unknown dead  body turns up in  local bistro. Penny’s skill is creating a place that is so appealing that  readers want to move there, bringing to life people you want to spend time with and describing meals that make you salivate.

Kathy Reichs works as a medical examiner in Quebec (and North Carolina). Apparently, the tv show Bones was inspired by Reichs’ work and she also works as a producer on the show.

The  heroine of her mysteries is Temperance Brennan, who, coincidentally, is a  forensic anthropologist who works in both Quebec and North Carolina. Monday Mourning is set in Montreal, where Tempe investigates the skeletons found in a pizzeria.  In this installment, her romance with detective Andrew Ryan is not going well, though the French Canadian setting is as magical as ever.