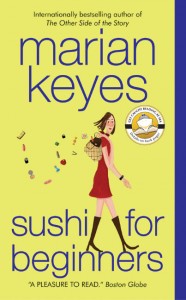 Marian Keyes, a native of Ireland, gives American readers a native’s  view of the differences in culture between Londoners and Dubliners.

Sushi for Beginners has some of the elements of a stereotypical chick lit book (a frank, outspoken heroine, a cadre of funny pals, a glamourous profession). But she goes beyond the usual undemanding plots with an extra twist of being set in Dublin, which, apparently, is quite the backwater for the hyper-ambitious boss of our heroine.

Ashling works for Lisa, a ruthless fashionista, who is responsible for a new Irish fashion magazine, Colleen, and makes her subordinates pay dearly for the stress she is under. Jack Devine arrives just in time from the United States; to leaven Lisa’s power and to provide the spark of potential romance. The daily grind of the magazine world is depicted as mostly very hard work, with the occasional perks fought over by Ashling, Lisa and their co-workers.

Keyes is one of the first of the genre and is one of the grittier and more uncensored. She isn’t afraid to address topics like the alcoholism and serious depression of her  characters.

Bad Behavior has blocked 1736 access attempts in the last 7 days.