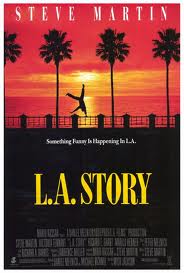 Iconic movies  about Los Angeles are:

L.A. Confidential, based on the book by James Ellroy. 1950’s Southern California in all it’s noir glory. Three cops are drawn into a complicated web of crime involving prostitutes and plastic surgery. Heavy hitters like Kevin Spacey, Guy Pearce and Russell Crowe are fun to watch, even as the plot gets more and more challenging to follow.

The Player, based on the book  by Michael Tolkin. In typical Robert Altman fashion, the film is jam-packed with movie actors playing themselves (over 65 of them). Part of the fun is spotting them as they pop up in the background. Tim Robbins is “the player”  – a movie executive who is in constant negotiations with screenwriters and actors.

L.A. Story, screenplay by Steve Martin. One of Sarah Jessica Parker’s breakthrough performances; she plays a bouncy, free-spirit named SanDeE*, who has a life-altering effect on weatherman Steve Martin. Like The Player, this is a satirical look at the L.A./Hollywood lifestyle, though more affectionate and celebratory.