A sure sign of spring – baseball is back! The national pastime has returned with (and I never thought I’d get to say this so I’m going to savor it) the defending World Series Champions Chicago Cubs (yeah, the thrill of saying that is never going to fade!), an early favorite to repeat. 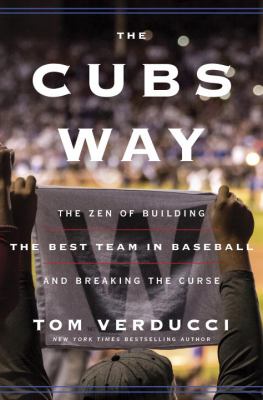 Like any sports team that wins a championship, a new crop of books about the team soon pop up as publishers rush to take advantage of the excitement and interest. Most of the time – for 108 years actually – Cubs fans haven’t had a reason to look for books to relive a great season. All of that has changed now and books about the 2016 team and their epic World Series run are arriving. Here is a sampling:

A Season for the Ages by Al Yello is more in-depth and looks at how the Cubs built a team that could break the drought. Just arrived is The Cubs Way by Tom Verducci which also looks at the winning Cub formula, concentrating especially on Theo Epstien (president of baseball operations) and Joe Maddon (manager) and the strategies they followed to create a team.

Coming soon is The Plan by David Kaplan, also about Epstein and Maddon’s baseball strategies (it’s safe to say that baseball managers everywhere are studying these ideas very carefully!), My Cubs: a Love Story by NPR’s Scott Simon and Teammate: My Life in Baseball, a biography by David Ross, one of the key Cub players, now retired (and on Dancing with the Stars!) It’s safe to say there’s plenty to read during rain delays and travel days!

The Cubs home opener is tonight; they’re going to raise the World Series banner (I still get chills saying that) and there’s sure to be lots of pomp and circumstance and happy tears (and maybe Bill Murray in the stands?) Someday has come and we went all the way – let’s do it again!

The World Series returns next week when baseball plays the final games of the season to crown it’s champion. Baseball continues to be part of the fabric of being an American, whether you’re a rabid fan or a casual observer (being a Cubs fan, I tend to be forced into the second category) There is no shortage of books about the game, from biographies to histories to analysis. Here’s a sampling of some of the newest titles.

The Baseball Codes: Beanballs, Sign Stealing and Bench-Clearing Brawls: the Unwritten Rules of America’s Pastime by Jason Turbow. This is an entertaining look into the varied,  unwritten rules that govern baseball as played by the pros. Most people are familiar with a pitcher purposely hitting a batter as retaliation, but did you know the ins and outs of how to slide, whether or not to talk during a no-hitter, how to give way to a relief pitcher? These examples and many more are explored, often hilariously, with multiple references both historic and recent. For every baseball fan.

The Last Hero: A Life of Henry Aaron by Howard Bryant. Before the age of steriods made us all skeptical of the records and feats of baseball players, there was Henry Aaron. Playing during the era of civil strife and lingering racism, he brought dignity and grace to the game, breaking multiple records (including the famous home run mark), cementing his place in history. This is a serious biography not just of the man but of that historical time in America, written with depth and scholarship.

Perfect: Don Larsen’s Miraculous World Series Game and the Men Who Made it Happen by Lew Paper. 2010 is being called the “Year of the Pitcher” and we’ve already been treated to phenomenal pitching in the playoffs, including Ron Halladay’s no-no – the first playoff no-hitter since Don Larsen’s perfect game in 1956. Relive that historic game (still the only post-season perfect game) and the men who participated. Each chapter covers one of the 19 players, superstars and journeymen alike, all on their way to becoming part of baseball legend.

Bad Behavior has blocked 1732 access attempts in the last 7 days.