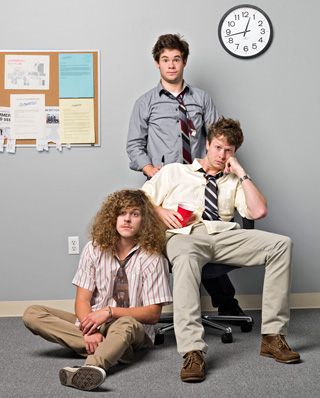 Workaholics, which just finished it’s second season on Comedy Central, is a quirky comedy about three recent college grads named Blake, Adam, and Anders who live together and work together (literally in the same cubicle) at a ho-hum telemarketing firm.

By combining the quirkiness of The Office and the outrageousness of It’s Always Sunny in Philadelphia, Workaholics manages to be both audacious and sweet. These guys may scam their way out of the office drug test or lead a strike when they aren’t allowed to take a day off for Half-Christmas, but they really do care about each other and their coworkers (Their goofy friendship with their nerdy coworker, Jillian, is so adorable).

However, what I find most notable about Workaholics is the show’s constant references to Rugrats, Home Alone, and Darkwing Duck. Yes, we Generation Y-ers have finally come of age and have made it not only into the workforce, but also into the writers’ chairs of cable television. Yippy Skippy! (The show has yet to make a Muppet Babies reference, but I’m sure it is coming..) I highly recommend checking out Workaholics to those fans of South Park, It’s Always Sunny in Philadelphia, and Nickelodeon’s All That (the original era). 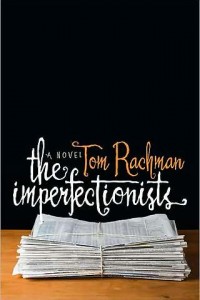 The Imperfectionists by Tom Rachman is a series of narratives by different people affiliated with a newspaper in Rome.  Each odd-numbered chapter is told by a different character, like struggling freelance writer Lloyd, hated CFO Abbey, and longtime reader Ornella.  The even-numbered chapters are devoted to the history of the newspaper, starting with its founding by millionaire Cyrus Ott and ending with its downfall in the current Internet age due to declining readership.

My big complaint about the book is that because it is subtitled “A Novel”, I was expecting a novel.  But what we get is individual chapters that tell the stories of different characters, and those characters’ lives don’t really intersect except that they all happen to work at the same newspaper.  Because of this, it feels much more like a collection of short stories, which I’m not uaually a fan of.  That’s not to say that this book isn’t well done, it just wasn’t what I was expecting.  If you’re interested in the topic and like short stories, you should give it a try.  There are aspects of it that I really did enjoy, especially seeing the history of the paper unfold throughout the book.  At its heart, The Imperfectionists is a book about people trying to get by despite the fact that their careers seem doomed.  It seems especially relevant when we hear so much today about print journalism going by the wayside in favor of getting our information online. 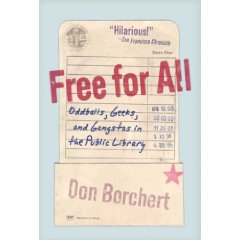 It’s a comfort to read about the daily struggles of your counterpart in another setting. For some, this can serve as occupational therapy. For others, just the pleasure in knowing some scenarios are identical no matter where you go. The social mores of your fellow working-class schlub can lead to a-ha moments of “I know that guy, save for a different name, age, and shirt.” This is the case with mandatory viewing like NBC’s the Office television program, or 1999 cult film Office Space.

That was my impression of Free for All: Oddballs, Geeks, and Gangstas in the Public Library by Don Borchert. Some of the shocking tales of this Los Angeles Public Library clerk, you’ll be surprised to know, might trump even the mighty DPL’s offerings.

Are there any tales or films about the everyman that resonate with you?

Bad Behavior has blocked 1328 access attempts in the last 7 days.