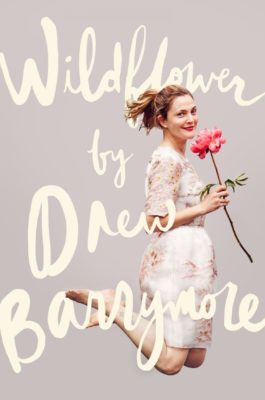 Actress Drew Barrymore is anything but conventional.  So it comes to no surprise that her book is unconventional as well. Instead of writing a memoir, Drew wrote a book of stories of her life; stories that she wanted to revisit and share with the world.  And her stories are not placed in chronological order.  One story will be about being a mother, the next one she talks about her time on the set of E.T.  As Ms. Barrymore writes herself in the preface, “This is a book you can dip into and read when you want”.  And it truly is.  You could put Wildflower down and not read it for awhile, but come across it again and be delighted with the stories.  Or, you could binge read Wildflower and learn more about Drew Barrymore.  The choice is really up to you.  Either way, this biography truly is a book of stories that are very fun to read.

I chose to listen to Wildflower on a recent roadtrip.  Drew narrates the book herself and I loved listening to her read.  My favorite part may have been when she was describing her childhood after filming E.T.  Her mother decided to move to “the Valley” and Drew blames her mother for giving her the “Valley Girl” voice that she cannot seem to get rid of.  This happens early in the book, so for the rest of the duration of the audiobook, I would catch myself laughing at her “Valley Girl” voice when she said certain phrases.  I thoroughly enjoyed listening to Drew Barrymore read (and sometimes scream and sometimes laugh) her own book.

Drew Barrymore has certainly led an interesting life.  She started acting when she was a toddler and describes going on auditions as a child and meeting Steven Spielberg.  Drew talks about legally separating herself from her mother when she was a teenager.  She discusses being a Barrymore and her relationship with her father.  She talks about travelling as a teenager.  Drew discusses producing and starring in movies.  And she discusses being a mother. Perhaps the sweetest story in the book is towards the end.  Drew discusses meeting her husband’s parents, Arie and Coco and how she hit the “In-Law Jackpot”.  She has such a good relationship with her in-laws that she asked Arie to walk her down the aisle and for Coco to walk in with her husband. It is quite clear that the theme of the book Wildflower is Drew Barrymore’s relationships with other people; her family, her friends, her co-stars, and the people that have touched her life.