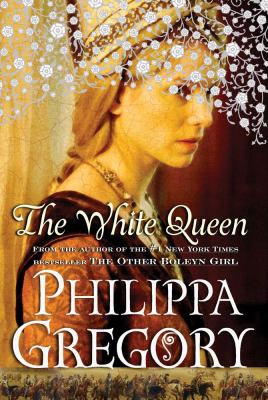 Well, that’s another month finished in our 2018 Online Reading Challenge! How was your month? What did you read (or watch)?

I read – and enjoyed – Philippa Gregory’s The White Queen which is about Elizabeth Woodville who was married to King Edward IV. It might help you to place who she was when you realize she was the mother of the Princes in the Tower, the two young boys who disappeared from the Tower of London and were never found. Her story takes place toward the bitter end of the War of the Roses – the York family vs the Lancasters. Often called the Cousins War, it raged for more than 30 years pitting families against each other.

Elizabeth is a young widow from a Lancaster family whose lands have been confiscated by the Yorks, currently in power. She goes to the new king, Edward IV to beg for her inheritance and she and the King fall in love. She refuses to become his mistress and so he marries her in secret. Because she has no political influence, the marriage is opposed and even challenged by Edward’s advisors but Edward stands by his vows. Gregory depicts the marriage as a love match at a time when most if not all royal marriages were for political gain or to strengthen diplomatic ties. Edward and Elizabeth had ten children and their reign was prosperous and encouraged the advancement of science and the arts. Edward was a popular with the people, but he constantly had to go to battle to put down uprisings from other claimants to the crown including his best friend and former adviser and even his own brother. When Edward died suddenly after a short illness, the battle for the crown became even more intense despite his having left two male heirs.

Throughout all this bloodshed, the women wait. They keep the households running and the children educated and they grieve. But they also plot and influence and sometimes turn the tide of battle. Gregory characterizes Elizabeth and her mother as witches (both were accused and her mother arrested for being witches) who are able to whistle up a storm or commune with Melusine, a water spirit. The magic is incidental and well within the framework of historical record, but shows Elizabeth as powerful in her own right. A brilliant strategist with a spine of steel, she commands respect. The book ends before Elizabeth’s story is finished; I may read the next in the series, The White Princess, to see what happens when her daughter becomes Queen.

I like history and very much enjoyed seeing this distant time through the eyes of a woman. Of course, we can’t know exactly what was said in conversation, or understand what influenced and swayed decisions, but Gregory creates plausible scenarios and speculates on several mysteries especially what might have happened to the Princes in the Tower. All of the fighting and disloyalty does become tiresome though – people changed allegiances constantly, turncoats (sometimes in the midst of battle) and backstabbers. And the English really need to branch out with the names – so many Richards and Edwards and Henrys – it’s difficult to keep them straight!

Now it’s your turn – what did you read in October?

Bad Behavior has blocked 1344 access attempts in the last 7 days.