As you can reliably guess from the fact that I write for this blog, I am a librarian. So I knew I would love Among Others by Jo Walton as soon as I read the dedication page:

This is for all the libraries in the world, and the librarians who sit there day after day lending books to people. 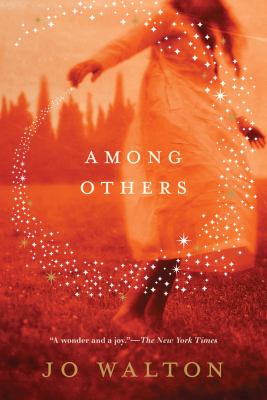 This book is for me! Awesome!* And this Hugo & Nebula award-winning novel is a treat. Mori is a well read 15 year old who has already accomplished a lot: she overthrew her mother, an evil witch, in a magical battle that killed her twin and left Mori with a shattered hip. She’s read just about everything that’s ever been published in the SF genre (well, everything before 1979, when this novel is set), besides Philip K. Dick, whom she dislikes. In the Wales of Mori’s childhood, magic and fairies are very real, but they aren’t all-powerful. Magic isn’t even the focus of this story; what could have been a bombastic, typical tale of good triumphing over evil (at a great cost) in a climactic magical duel  is instead a bildungsroman, the story of a smart, confident, magical girl discovering her identity. Mori’s most important challenge is discovering the value in her life now that her deed is done and her twin is dead.

When you are the hero, when you’ve already saved the world, and you’re a teenager stuck at boarding school based on the whim of a father you’ve never known, where the other girls taunt you for your Welsh accent and your limp, and where both the fairies and the magic of your childhood and your twin – your other half – can never reach you, what is the point of living? On Halloween, Mori sees the ghostly remnant of her sister near a portal to the next world and is tempted to follow and join her in death, but:

…I was halfway through Babel 17, and if I went on I would never find out how it came out. There may be stranger reasons for being alive.

Her love of books, libraries, writing, and the other worlds of the SF genre buoy Mori through the turbulent year after her sister’s death and lead her to the path her adulthood will take, so though her tale may sound grim, it’s really effervescent and uplifting.

Among Others is a fantasy novel, but Mori’s engagement with the realm of science fiction is so cogent, meaningful, and pervasive in the novel that this is a must read for fans of both genres.

*I have to add, though, that we do a lot more than sit and lend books! Sometimes we stand and lend DVDs 🙂