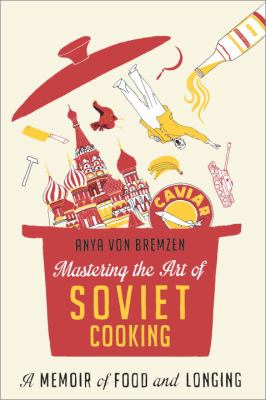 A James Beard Award-winning writer captures life under the Red socialist banner in Mastering the Art of Soviet Cooking in a wildly inventive, tragicomic memoir of feasts, famines, and three generations.

With startling beauty and sardonic wit, Anya von Bremzen tells an intimate yet epic story of life in that vanished empire known as the USSR–a place where every edible morsel was packed with emotional and political meaning. Born in 1963, in an era of bread shortages, Anya grew up in a communal Moscow apartment where eighteen families shared one kitchen. She sang odes to Lenin, black-marketeered Juicy Fruit gum at school, watched her father brew moonshine, and, like most Soviet citizens, longed for a taste of the mythical West. It was a life by turns absurd, drab, naively joyous, melancholy–and ultimately intolerable to her anti-Soviet mother, Larisa. When Anya was ten, she and Larisa fled the political repression of Brezhnev-era Russia, arriving in Philadelphia with no winter coats and no right of return. Now Anya occupies two parallel food universes: one where she writes about four-star restaurants, the other where a taste of humble kolbasa transports her back to her scarlet-blazed socialist past.

To bring that past to life, in its full flavor, both bitter and sweet, Anya and Larisa, embark on a journey unlike any other: they decide to eat and cook their way through every decade of the Soviet experience–turning Larisa’s kitchen into a “time machine and an incubator of memories.” Together, mother and daughter re-create meals both modest and sumptuous, featuring a decadent fish pie from the pages of Chekhov, chanakhi (Stalin’s favorite Georgian stew), blini, and more. Through these meals, Anya tells the gripping story of three Soviet generations– masterfully capturing the strange mix of idealism, cynicism, longing, and terror that defined Soviet life. We meet her grandfather Naum, a glamorous intelligence chief under Stalin, and her grandmother Liza, who made a perilous odyssey to icy, blockaded Leningrad to find Naum during World War II. We meet Anya’s hard-drinking, sarcastic father, Sergei, who cruelly abandons his family shortly after Anya is born; and we are captivated by Larisa, the romantic dreamer who grew up dreading the black public loudspeakers trumpeting the glories of the Five-Year Plan. Their stories unfold against the vast panorama of Soviet history: Lenin’s bloody grain requisitioning, World War II hunger and survival, Stalin’s table manners, Khrushchev’s kitchen debates, Gorbachev’s disastrous anti-alcohol policies. And, ultimately, the collapse of the USSR. And all of it is bound together by Anya’s passionate nostalgia, sly humor, and piercing observations.

Mastering the Art of Soviet Cooking is that rare book that stirs our souls and our senses. (description from publisher) 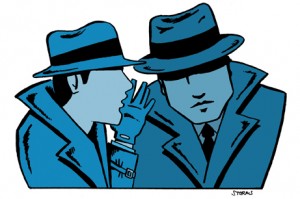 In June, when the FBI arrested 10 Russian spies who had been living and working in the U.S.  , it brought to mind books and movies that were based on this very plot. These two films were filmed near the end of the Cold War – an era that seems very distant now.

No Way Out (based on the book, The Big Clock by Kenneth Fearing) starred Kevin Costner as a heroic  Navy commander. In a labyrinthine plot of deceit and betrayal, Tom Farrell, as played by Costner, is forced by the Secretary of Defense (Gene Hackman) to search for a KGB mole. The Secretary begins the investigation to distract everyone from an affair and accidental murder, but, it turns out, there is a surprising twist in this  extremely complicated plot.

Sleepers was a 4-part TV series in 1991 about two KGB agents who had been in England for 25 years. They were to establish themselves as native British citizens who would,  theoretically, be called to action someday.  However, as the Soviet Union collapsed, they were forgotten. The two men, by this time, are well established and are not anxious to disrupt their English jobs and lifestyle.  One is a factory worker with a wife and young children, the other is a playboy and  investment banker. Their accidental discovery is played out as a comedy, but there is real emotion in their dilemma.

What is truly fascinating is the long-forgotten replica of  English kitchen, living room, etc. where the spies had learned to be British. This gives insight into what it means to be British and Russian (in the ’60’s and the ’90’s).