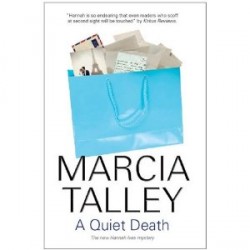 At the start of A Quiet Death, Hannah Ives is riding the Washington D.C. metro when her train crashes. Though injured herself, she tries to help a fellow passenger who is very badly hurt. In the confusion, she ends up with a shopping bag he was carrying. Eventually she reads the letters it contains in order to return the bag to him.

I picked up the book because I was interested in the Washington D.C. setting and that promise was fulfilled. Marcia Talley does well in portraying a city that revolves around the government – for example, the subtleties of how prestigious a restaurant is  – based on the level of the bureaucrats who frequent it.

The mystery itself, however, seemed a bit contrived. Instead of checking with transit or police officials who may be able to locate the mystery passenger, Hannah decides to find him herself, relying on simple google searches. Nothing very intriguing there. Security is also lax at Fox, I mean Lynx, News where Hannah drops in to interview their news anchor, whom she’s never met.

A pleasant read, but not a real page turner.