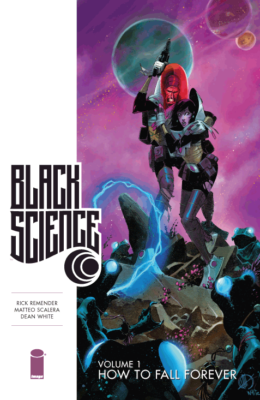 Across an alien landscape, two people in space suits race for safety. At each turn, they are thwarted. The woman is killed, but the man runs on, clutching a container, cursing himself for his mistakes, his obsessions, that have brought him – and his family – here. A race against time, it seems, to reach the Pillar before it is too late.

This breathless scene opens Rick Remender’s Black Science. Grant McKay, our narrator, does make it back to the Pillar, moments before it jumps. Along with Grant are is two children, teenaged Pia and younger Nathan, his five (now four)-person team of scientists and the man who bankrolled the project. We learn that Grant and his team have done the impossible – punched through the barriers between the multiverses’ dimensions, allowing humans to travel to new dimensions not only to explore, but also to exploit, possibly finding the keys to preserving our species. The method is called black science, and the Pillar is the tool. But the tool has been sabotaged, and now it and its passengers have no control over when or to where they will jump.

Grant laments his hubris and his recklessness for taking his children and his team with him on the first manned jump throughout the story. Each new dimension is as strange as the next, dumping the team into war and circumstance that are truly alien. There appears to be no way of repairing the Pillar, and now that the multiverse has been breached, nothing is certain, especially survival.

Remander’s (Uncanny Avengers, Fear Agent) novel moves at a frenetic pace, the art is both stark and riotously vivid. It harkens back to the era of pulp science fiction with non-stop action and lurid details. With three more volumes already published, this is a great choice for anyone looking for a true science fiction adventure. Fans of “The Venture Bros.,” will enjoy this considerable darker series (and the close similarity Grant McKay bears to a certain winged super-villain).