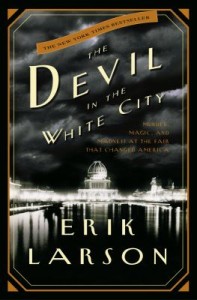 A couple of months ago I heard on the radio that Martin Scorsese and Leonardo DiCaprio were going to collaborate yet again on what will most definitely be another blockbuster hit. The two have previously collaborated on The Aviator, Shutter Island, Gangs of New York, The Departed, and The Wolf of Wall Street. Each film was nominated by the Academy of Motion Pictures for Arts and Sciences (aka the best award in film you can attain) for Best Film and Directing with DiCaprio getting the Best Actor nomination for 3 out of the 5 films. Scorsese won the Oscar for Best Director and Best Film of the Year for The Departed. When these two get together, everyone turns out to see what they have created, especially me! This film is 2 years away from its release, and I am already gearing up for it.

This time they are bringing you a film based on the 2003 book The Devil in the White City by Erik Larson. Erik Larson’s work is the story of the true events surrounding the 1893 Chicago World’s Fair. He tells this story in interweaving fashion, focusing on Architect Daniel Burnham and serial killer H.H. Holmes during the years leading up  to the World’s Fair. Both men shaped Chicago’s history in very different ways.

When I first heard about this novel, I wasn’t too excited to pick it up. My fear was that it would be too much about gruesome murders for me to enjoy. But it wasn’t. The book is about paramount history that happened just a few hours away from where we live. In fact, one of Holmes’ lovers and later victim was from Davenport, IA.

While there are a few murderous details, Holmes’ part of the book is more about how he was able to carry on his killings undetected for so long. Multiple accounts describe Holmes as an ideal individual that exuded charm and warmth. While I am eager to finish and read about Holmes’ inevitable demise, I have truly adored page after page of historical firsts. The World’s Fair was such a monumental occassion that everyone wanted to be part of it. Great inventions were first unveiled, historical figures rubbed elbows, heroes we have only read about preformed, and so..much..more.

I have no doubt that Scorsese will capture the essence of this time period and the innumerable historical particles sprinkled throughout the book. As for my all time favorite actor, Leonardo Dicaprio, I know he will deliver. It was a bit disheartening to learn that DiCaprio would encompass H. H. Holmes, America’s first serial killer, but then I realized one cannot always play the hero. And in fact, many actors do their best work when playing the villain. I wouldn’t be surprised if DiCaprio gives his best performance ever with this new film.

Photos from the 1893 World’s Columbian Exposition.

More about the World’s Columbian Exposition.

Bad Behavior has blocked 1622 access attempts in the last 7 days.