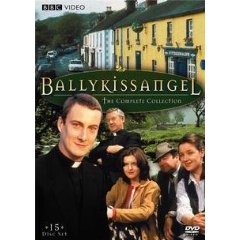 Many years ago, one summer evening I was switching channels, trying to find something other than reruns. On IPTV, I came across a charming show about a village in Ireland. It had quirky characters, an English Catholic priest who didn’t want to be there and an feisty Irish lady Barkeep. Thus began my love affair with Ballykissangel. It was a wonderful BBC soap opera, which was broadcast 1996 – 2001. There is humor and sadness. Peter Clifford, ( Stephen Tompkinson) a young Catholic priest from Manchester, is transferred to the village of Ballykissangel, Ireland, and is taken by the dry-humored publican Assumpta Fitzgerald (Dervla Kirwan) who has almost the exact opposite of his good nature and dislikes the organized church. As soap operas, go this one was very good. The third season was the best as Peter and Assumpta declare their love and are going to leave Ballykissangel.

Both Stephen Tompkinson and Dervla Kriwan left the show at the end of the third season. The 4th, 5th and 6th seasons were good, but didn’t compare to the first 3 seasons. During the last 3 seasons a young actor, Col Farrell, joined the show. He is now know as Colin Farrell, star of many major motion pictures. Stephen Tompkinson now stars in a IPTV show called Wild at Heart, which we also own.