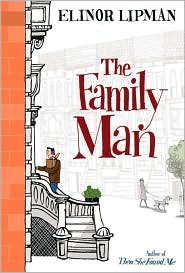 Recently retired and living a quiet and elegant life on the Upper West Side in New York City, Henry Archer unexpectedly gets a second chance with his step-daughter, someone he hasn’t seen for 25 years. Somehow these opposites – Henry is older, gay, successful, Thalia is an aspiring actress just scraping by – make a connection that benefits them both. Thalia brings sparkle and excitement into Henry’s world, as well as more than a few complications including the reappearance of his eccentric ex-wife, an introduction to the world of celebrity and a new love interest.

Lipman is the master of the modern comedy-of-manners story – her characters are real and likable (even the annoying ones), and the dialogue is sharp, witty and fast-paced. The situations our heroes find themselves in may be unlikely, but Lipman grounds them in reality and gives them heart. The Family Man will keep you laughing and wishing for more.