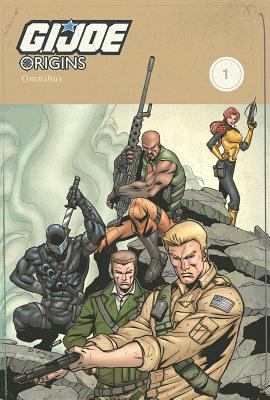 Need a good old-fashioned American graphic novel about heroes? Look no further than G.I. Joe: Origins Omnibus, Volume 1. This graphic novel has everything you could hope for in a superhero graphic novel, except that the characters are more realistic for kids to hope to become and to look up to. Nobody in this book was born a God with special powers(Heeeyyy Thor and Loki), none were bitten by radioactive spiders(Lookin’ good, Spider-Man), received their powers through some sort of solar flare/energy boost(Fantastic Four), nor do they have tons of money to buy all the fancy equipment they could ever want(Here’s looking at you, Iron Man). The people in the G.I. Joe program mostly all have military backgrounds with the skills and training they received as part of those organizations playing a major role in their initial selection to and their subsequent success in the program.

G.I. Joe: Origins Omnibus, Volume 1 gives readers a much-needed glimpse into the origin stories of various members of the G.I. Joe team. Something I noticed throughout this volume was the level of secrecy that is shown in both the selection of new members to the team and the shadowing of the actual name of their organization. This level of secrecy is necessary for them to maintain once readers see the wide variety of highly dangerous and covert missions they go on.

The origins of the G.I. Joe team came out of the changing and new era of war. New kind of war and fighting means that the good guys need to find a fighting force. The war that the G.I. Joe team finds themselves fighting is not out on the battlefield; it is instead being waged within cities, involving more innocent bystanders and a new breed of villain that is willing to do anything to create havoc. Check out this graphic novel to learn more about each G.I. Joe and to really see how this team came together.

Bad Behavior has blocked 1276 access attempts in the last 7 days.