Florence + The Machine — How Big, How Blue, How Beautiful

The third album from Florence + The Machine is live-sounding, tune-rich, unhinged in all the right places and powerful in all the best ways. In voice, lead singer Florence Welch has never sounded better. Includes the singles What Kind of Man; St. Jude; and Ship to Wreck.

The seventh studio album from the Grammy winning alternative band from the UK. The first single is Dead Inside. Co-produced by Muse and Robert John “Mutt” Lange.

Pitbull is back and ready to get the party started with his highly anticipated second Spanish language album. It promises to start the summer off right and keep the good times going throughout the year.

Almost five years since the release of his critically acclaimed solo debut, Flamingo, Brandon Flowers’s solo return follows a time of continued huge success with his band, the Killers.

Features twelve new tracks, written collaboratively by the band in London, Brooklyn, and Texas. This release marks a significant departure for the young British band from their previous two records. There is a minimalist yet panoramic feel to this new album.

The ever-popular music series brings together a collection of chart-topping hits from the worlds of pop, rock, rap, country, and more.

From rock and pop to rap, electronic, and country, one of music’s most popular series returns with a new collection featuring some of the hottest hits on the charts today.

Two of the biggest superstars in electronic music team up for a tour de force album that also includes guest appearances from Justin Bieber, 2 Chainz, and AlunaGeorge.

My Morning Jacket — The Waterfall 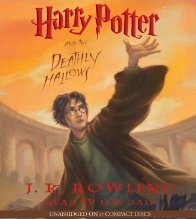 Every day, I have to drive across the bridge to get to work and back home.  Inevitably, cars are backed up for miles and I end up idling on I-74 for long periods of time.  Luckily, I always have an audiobook in my glove compartment for just such an occasion, and the ones that I come back to most often are the Harry Potter series, written by J.K. Rowling.  My personal favorite of the audio series is Harry Potter and the Deathly Hallows.

For an audiobook, the most important thing to have is a good narrator, and Jim Dale is one of the best.  He has won countless awards for his vocal portrayals of Harry, Hermione, Ron, and the rest of the Hogwarts gang.  Even if this is your fifth time hearing the story, Dale manages to evoke such excitement into his presentation of the text that it feels like a whole new experience.  You feel as though you are there at Hogwarts carrying on a conversation with your fellow Gryffindors.

My favorite to listen to has to be Harry Potter and the Deathly Hallows.  Jim Dale gets everything right, from the light moments to the dramatic.  I have found myself more than once having to pause the CD so that I wouldn’t be driving and crying over the climactic battle scenes  at the same time.  I highly recommend this series, or any other audiobook read by the fantastic Jim Dale.