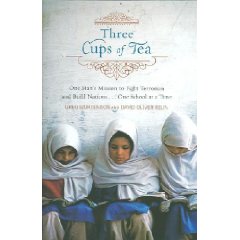 No, Three Cups of Tea is not a new book — it was published in 2006 – but I just got around to reading it.  Many of you may already be familiar with this book by Greg Mortenson and David Oliver Relin — it’s subtitle is “One Man’s Mission to Fight Terrorism and Build Nations. ”

Mortenson, barely alive after failing to summit K-2 in 1993, wanders lost and alone  into a remote area of Pakistan, and is cared by the villagers there for seven weeks.  In gratitude, he promises to return to build a school for the children who’ve been learning their lessons by scratching in the dirt.   Raising the funds proves challenging, but after many setbacks, he not only keeps his promise — he eventually builds more than 50 schools throughout rural Pakistan and Afghanistan.

As his mission continues after 9/11, he is met with death threats, a kidnapping, and many cultural challenges in dangerous Taliban territory.  Still, the overall lesson one takes away from this book is that one person really can change the world.

What about the title?  Well, it’s from an old Baltistan proverb.  “The first time you share tea with a Balti, you are a stranger.  The second time, you are an honored guest.  The third time, you become family.”  I can’t help but wonder how much better our world would be if we all could share just three cups of tea.