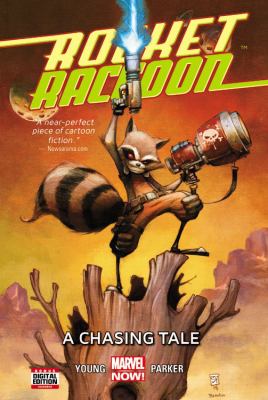 The release of the Guardians of the Galaxy movie brought about a slam of new materials about the characters to libraries and bookstores everywhere. One Guardians rendition that the library just purchased is Rocket Raccoon: A Chasing Tale. In this graphic novel, writer and artist Skottie Young, along with the help of many other artists, have created the world of Rocket Raccoon, one of the stars of Guardians of the Galaxy, and his friend, Groot.

In A Chasing Tale, Rocket spends his time away from the other Guardians of the Galaxy by going on a series of extra money-making adventures. His time rescuing princesses and saving the world may come to a screeching halt though when he is arrested for committing multiple murders on planets all over the galaxy and is thrown into jail! Rocket does what any other upstanding superhero would do in a situation like this: turns to the nasty underbelly of criminals that he knows exist to buy their help in figuring out who is setting him up and how it’s possible that someone could be framing him when he is the ONLY existing one of his kind left! It’s a mystery! With multiple groups chasing after him and wanting him dead, Rocket and Groot have to take matters into their own hands(or maybe ummm… paws and branches…) to figure out who or what is behind this frame job, what Rocket possibly could have done to make them so angry, and most importantly, if there actually are other creatures like him from Halfworld left.

Young has crafted a graphic novel that dabbles in Star Lord and other Guardians of the Galaxy knowledge, but mostly draws upon the character of Rocket Raccoon and Groot. Don’t be worried that you will be overwhelmed or need to have background knowledge about Rocket Raccoon in order to understand this graphic novel. Some references to previous adventures happen, but most are quickly explained by subsequent dialogue. The colors are vivid, characters and their stories well-developed, and some side storylines are introduced to help liven the main story arc up and to also introduce a look into why some characters are behaving the way that they do. The second volume, Rocket Raccoon: Storytailer, was just released and is on my list of things to order, so check the catalog soon to check out this next volume of Rocket’s crazy adventures!