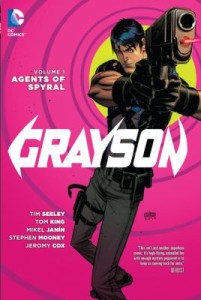 I’ve been reading tons of graphic novels lately. The main reason? I can usually get through a whole graphic novel in one sitting, usually even multiple ones in a day! It’s fabulous. Throw in a flashy cover and a high-paced story and I’m hooked. Grayson: Volume 1, Agents of Spyral fits all of my necessary graphic novel markers and BONUS: It’s about Robin/Nightwing, a thoroughly over-looked DC character if you ask me.

You need to understand some basic Robin/Nightwing backstory in order to not get confused, though Seeley and King do a very good job explaining his past life. Grayson: Volume 1, Agents of Spyral covers the story of Dick Grayson, a former circus acrobat, who after his parents were tragically killed in a trapeze accident(YES, I know this sounds ridiculous, but come on, as a superhero/spy, being an acrobat comes in SUPER handy), eventually comes to live with Bruce Wayne, aka Batman. Once Grayson figures out that Wayne is actually Batman, Grayson becomes his partner, Robin. They exist in peace, fighting crime in Gotham City, but once Grayson gets older, he decides to become Nightwing and continues to fight crime. Nightwing eventually is captured and killed by the Criminal Syndicate. Or is he?

Not a spoiler: He isn’t killed or this graphic novel would be over before it even began. Instead he goes on his merry way dispensing out justice across the globe and is eventually recruited into Spyral, a top-secret spy ring that is hunting for pieces of the Paragon, a God who was killed and who had his body parts distributed all over the world. Oh yeah, those body parts all just happen to be individual weapons of mass destruction. No biggie. So to recap, Grayson is now a spy for Spyral and is hunting down weapons disguised as body parts. Oh also, he’s actually a secret agent spying on Spyral and reporting to Batman because Spyral is actually looking to discover the secret identity of every superhero on the globe. (Turns out each superhero bestowed something special on each body part, hence how they became weapons of mass destruction). This plotline is fantastic! So many twists and turns that left me eagerly flipping the pages to find out what happened next. I also really enjoyed the bright pops of color and the way the artist decided to give such a lifelike feel to each character. Be on the lookout for the next Grayson volume!

Bad Behavior has blocked 1458 access attempts in the last 7 days.