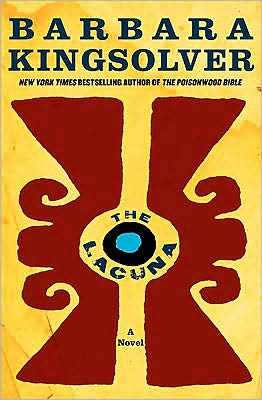 Lacuna: 1)an empty space or a misssing part  2) a cavity, space or depression.

This new novel by Barbara Kingsolver was worth the wait — it’s been nine years since her last novel, the very popular and acclaimed Poisonwood Bible.

The Lacuna takes place in both Mexico and the U.S. with most of it written in journal format.  Kingsolver also throws in some actual newspaper articles and other documents which add credibility to the time period (the 1930’s, 40’s and 50’s).  The main character, Harrison William Shepherd, is the son of a dull Washington bureaucrat and a flamboyant Mexican mother, who has left her husband to live with a current lover on a Mexican island.  Without school or friends to occupy his time, Harrison spends many hours swimming, where he discovers a lacuna in a sea cliff which leads to a secret,  hidden pool.  As Harrison matures, his particular set of skills gains him employment with the famous artists, Diego Rivera and his wife, Frida Kahlo.  Since they later harbor the exiled communist Leo Trotsky, Harrison ends up working as a secretary for him as well.  This part was especially interesting —  perhaps because of the real personages in the book, it was easy at times to forget that this was a work of fiction!

After Trotsky’s murder, Harrison comes back to the United States (accompanying some of Frida’s paintings) and settles in North Carolina, where he finally realizes his dream of writing romantic adventure novels.  He becomes a hugely popular author, but his luck turns sour when he is later cited as a Communist sympathizer.

It’s not until the ending that we discover the significance of the title.  As both Kahlo and Shepherd are fond of saying, “The most important part of the story is the piece you don’t know.”  Read it and enjoy finding  out for yourself.