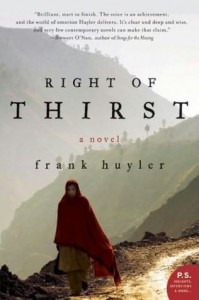 After his wife’s death, successful cardiologist Charles Anderson volunteers to assist with earthquake relief in an unnamed and impoverished Islamic country in Right of Thirst.  At the relief camp, he joins a young German woman doing DNA research as well as a local soldier assigned to them, presumably because he speaks excellent English.  Though they wait patiently and try to keep busy preparing, the refugees never come.   However, the volunteers do visit a local village where they find a young girl with a mangled foot, which Charles later amputates.  This scene is particularly credible, perhaps because the author is himself an emergency-room physician.

The fact that the author, Frank  Huyler, has also lived extensively abroad (including Iran, Brazil, Japan and  the U.K.)  seems to serve him well in describing cultural differences.  For example, one character explains that giving water to travelers is one of oldest laws in their religion. They call it the “right of thirst”, and that is why offering tea is an obligation, not simply a social pleasantry.

The book’s plot takes a sudden turn when artillery fire is heard along the country’s border.  It’s assumed that spies have mistaken the relief tents for army ones, so a quick escape is planned for the relief workers, traversing  dangerous mountainous terrain.  A tragic accident occurs, further tainting the doctor’s good-will expedition.  This is a book that will make you think;  it may also make you a bit sad, or perhaps it just might make you question relief efforts in general.  It also qualifies as a good choice for a book discussion group as there are ample opportunities for opposing viewpoints, such as the doctor’s role in his wife’s death.