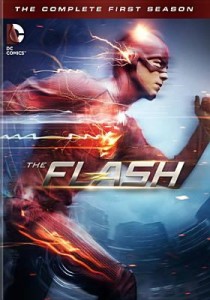 I’ve been on a superhero kick lately, as evidenced by all of my recent blog posts featuring superhero graphic novels. I decided to branch out on my last library check-out and snagged the first season of The Flash.

The Flash is a television series that began in 2014 and is currently running its second season on the CW. This show is based on the DC Comics run of the Flash and is actually of spinoff of Arrow, another show that is running its 4th season on the CW right now (the library has the first three seasons!). Don’t worry! It’s not necessary to watch all of Arrow in order to understand the story of The Flash. When the characters cross over, they do a good job of explaining their back stories.

In The Flash, Barry Allen is a crime scene investigator for the Central City police department. He’s an incredibly smart young man, one who is endearingly awkward and geekishly handsome. Barry moved in with his best friend, Iris, and her father, Joe, after his mother was murdered and his father was sent to jail for having killed her. Despite having to grow up with only Joe has a parental figure, Barry chose a career path that would help him learn all he can about the science behind his mother’s murder, something that would help him free his father from prison, and find the mysterious “man in yellow,” the man Barry believes to have killed his mother. After an explosion at Star Labs, Barry wakes up and realizes that he has become the fastest man alive. Every superhero has to have partners in crime and Barry found his in a group of scientists operating out of Star Labs since it was shut down. Realizing that he has an opportunity to help people, Barry and friends help to fine tune his abilities and he uses his new power to race through the streets of Central City to fight crime. Check out this first season to watch Barry test the limits of his speed, figure out ways to fight the other metahumans(what they call the people who were also affected by the explosion at Star Labs), and cheer for Barry as he struggles to find a way to free his father from prison.

Bad Behavior has blocked 1465 access attempts in the last 7 days.