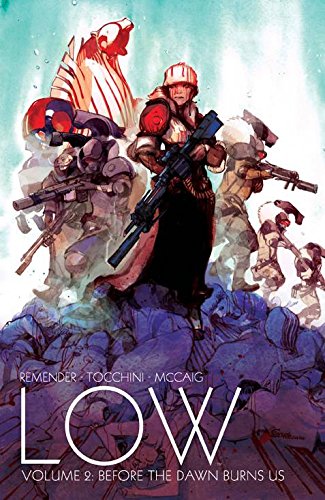 Rick Remender’s Low series is so far one of my favorite discoveries this summer. Low, Volume 2: Before the Dawn Burns Us brings to light the tragedies that the Caine family was faced with in the first volume and expands upon the ways the mother, Stel, is trying to rise up and save who she can.

In the first volume, the entire Caine family is torn apart with the father dead and the two daughters torn away from Stel and her only son. She vows to bring the family back together only to fall into despair. The sun has gone radioactive forcing all of the Earth’s inhabitants underwater, knowing they cannot stay there forever and hoping for an eventual inhabitable world to be found elsewhere. Shoot forward ten years and a probe has been recalled to the surface of the Earth, one that shows Stel that there is an inhabitable world elsewhere. She must get to the probe first and  find her children along the way.

In volume 2, Stel wrestles with herself as she feels her hope in the future fading, something that had previously seen her through numerous bad situations. Stel struggles to salvage what she can of her mission to find the probe and ultimately save all of humanity, while a side story shows Stel’s estranged daughters working to find themselves and each other after their horrific split from their parents. One of her daughters, Della, is the relentless Minister of Thought, living in a totalitarian state where hope and optimism are squashed. Stel and two members of Marik’s surviving gladiator team are still searching for the probe. This second volumes is full of tragedy, loss, and hopelessness, but is ultimately about what happens to all of us when we lose hope and try to find it again.