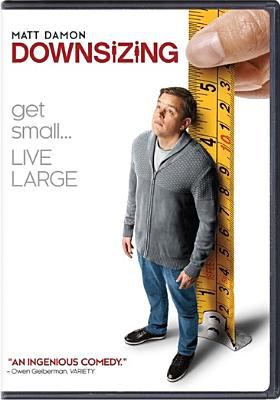 Without a doubt, the best part of working at the library is the people. If it weren’t for one of our regular patrons recommending it to me, I probably would never have watched Downsizing. I’m not a huge fan of Matt Damon, and the art on the DVD label made it seem like a slapstick fish out of water comedy, which isn’t really my thing. As it turns out, books aren’t the only things that shouldn’t be judged by their covers. Not only was Downsizing not what I expected, it turned out to be almost tailor-made to suit my tastes: a science-fiction satire with a healthy mix of both comedy and drama.

The film opens with Rolf Lassgård’s scientist character, Dr. Jorgen Asbjørnsen, making a scientific breakthrough: he has finally mastered the titular procedure, through which he can shrink humans to a size of five inches. His motivation is ecological in nature – someone downsized to one-thirteenth of their original size will only require one-thirteenth the amount of resources they would have otherwise needed. However, many people undergo the procedure for economic reasons – since you only need one-thirteenth the amount of resources, your money goes thirteen times further – in addition to the unspoken reason that has always led humans to make major changes: the belief that it will solve their problems (it’s not a spoiler to say this belief is more often than not mistaken).

Enter Matt Damon and Kristen Wiig’s married couple, Paul and Audrey Safranek. At Paul’s high school reunion, they run into his old friend Dave Johnson (played by a sadly underutilized Jason Sudeikis) who has undergone downsizing with his family. Dave makes a compelling case for downsizing, and it’s not long before we see the Safraneks buying a home in Leisureland, one of the most popular settlements for small people, as society has come to call those who have downsized. On the surface, Leisureland appears to be an idyllic realization of the American Dream, finally made attainable for more than the 1%. Of course, as is so often the case with these Stepfordian communities, all is not what it seems. As it turns out, class divisions still exist in small settlements, and in fact are thrown into even sharper relief via contrast with the utopic appearances.

And of course, conflict still exists on the interpersonal level as well. Paul has problems with Audrey (that I would be remiss to spoil), as well as with his gregarious neighbor Dušan (played by Christoph Waltz with his usual scene-stealing gusto). He also gets into a complicated relationship with the political activist Ngoc Lan Tran (played by Hong Chau in a starmaking performance). Downsizing raises questions about class conflict, climate change, and human nature; and while it doesn’t always have satisfactory answers, the brilliant acting and lively cinematography make this breezy film well worth a watch.

Bad Behavior has blocked 1489 access attempts in the last 7 days.