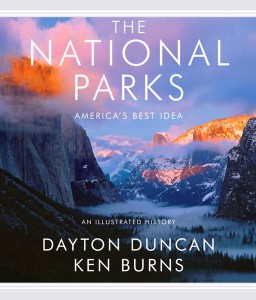 They conjure images of magnificent scenery, destinations for summer vacations with family and sites of historical significance. Most American’s feel a fierce pride in these beautiful places and they should – the National Parks preserve some of the most beautiful and most important locations in our country. They are also uniquely American – before Yellowstone was set aside as the first National Park in 1872, land was preserved only for royalty or the very wealthy. Never before had land been set aside for the people and, like so many of the ideals that America has reached for, it has now become a standard for the rest of the world.

Ken Burn’s spent 8 years filming and creating the six-part PBS series The National Parks: America’s Best Idea which explores the history of the National Parks, from exploitation to spiritualism to conservation, a mirror of the character development of the American people. Co-written with Dayton Duncan, the companion book is as magnificent as the lands and peoples it portrays, heavily illustrated and with vivid writing that bring to life the characters and events that shaped the parks.

Be sure to visit the PBS website for the series which has some cool features including background information on the filming of the series, a place for you to share your own National Park stories and in-depth information about visiting the parks. And in case you missed the series when it ran in September, you can now watch the episodes online. Or put a hold on the library’s copy. And celebrate your American heritage.