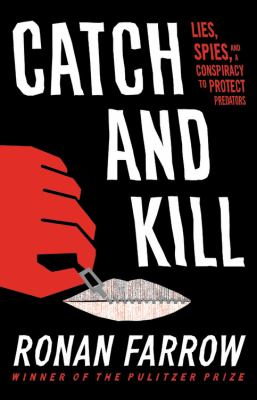 I am only slightly embarrassed to admit that when I need a break from the serious news of the day, I turn to celebrity gossip. I love reading about the secret inner-workings of the entertainment industry, the behind-the-scenes machinations that make the celebrity machine look so effortless, and the blind items about who is misbehaving. So when journalists like Jodi Kantor, Megan Twohey, and Ronan Farrow broke the news about accusations of producer Harvey Weinstein’s decades of abusing women, I thought to myself, “I’ve read about this on blind items sites a hundred times, how is it that none of these people knew about this?” Well, as is made clear in Ronan Farrow’s gripping new book Catch and Kill: Lies, Spies, and a Conspiracy to Protect Predators, it sure seems like a whole lot of people did, in fact, know.

Catch and Kill takes the reader through the process of how Farrow investigated what was previously only whispered about: claims that mega-producer Harvey Weinstein routinely harassed and abused women for decades. If you were a “Friend of Harvey”, you made it in the entertainment industry; if you weren’t, you didn’t. For a non-fiction work that everyone knows the ending to, I found Farrow’s account to be breathless, fast-pasted, and engaging. Though I had read Farrow’s reporting of the accusations against Weinstein, there was a lot I didn’t know about how the story was investigated and all the hurdles Farrow faced in trying to report it. What was most startling was Farrow’s account of NBC executives who, after months of reporting and collecting firsthand accounts and even an audio recording of Weinstein admitting to an assault, suddenly wanted him to stop talking to sources and drop the story. This part of the story is still ongoing, with NBC disputing Farrow’s claims and alleging that he had no story until he went to The New Yorker and published it a month later.

One of the more thriller-esque parts of the book was the way he weaved in details about Weinstein apparently hiring an Israeli intelligence agency to follow Farrow and gather information on him in an effort to smear his reputation. Every few chapters or so we get a glimpse of two men sitting outside Farrow’s home in a silver Nissan or just so happening to be at the same restaurant as him, and later the precautions Farrow had to take when it because clear that he was in fact being followed and his phone was being targeted. But even in such serious parts of the book Farrow managed to include some levity; my favorite of these such moments was the revelation that the private investigators assigned to tail Farrow’s boyfriend Jon Lovett (of podcasts Pod Save America and Lovett or Leave It) gave up because Lovett’s routine was too boring (to which Jon replied “I’m interesting!…I went to an escape room!”)

All throughout the book, Farrow makes it clear that though he received many acclaims for bringing this information to light, the real heroes of story are the women who risked everything to come forward and speak up about what had been done to them. Many of these women held onto their stories for years because they had seen others lose their careers after trying to speak up; for them to do so at this time was courageous and Farrow is quick to point that out at every turn.

This is a great read if you’re interested in the incredibly thorough process of reporting, real-life espionage, and demolishing institutions that empower and encourage abusers. Highly recommended.