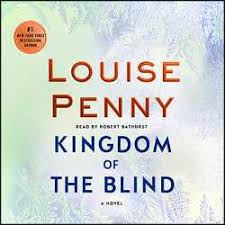 Every year in the late summer or early fall, I anxiously anticipate a new mystery by Louise Penny in her continuing Chief Inspector Armand Gamache series set in Three Pines, a small village in Quebec.  The fourteenth book in the series is Kingdom of the Blind and it is clear that Penny’s writing is as strong as ever.  I usually listen to the audiobook version of Penny’s books.  The narrator is Robert Bathurst, a former character on Downton Abbey (Edith’s suitor Sir Anthony Strallan) and his voice brings the Canadian inspector alive.  If you are new to the Chief Inspector Armand Gamache series, start with Louise Penny’s first book, Still Life.

The book begins with Armand Gamache, the former head of the Surete du Quebec,  who is waiting to hear the verdict concerning his botched drug raid, which was a complete disaster.  As the case hangs over his head, the drugs that eluded his squad begins to snake through the streets of Montreal with deadly precision.  Gamache also learns of the betrayal of one of his “second chance” recruits, who has slipped back into addiction.

While waiting for the internal investigation to end, Gamache, along with friend and Three Pines resident Myrna Landers, have learned that they been named as executors of a woman’s estate whom neither of them know, along with third man who is a stranger to them.   Why would this woman, who referred to herself as “The Baroness” appoint Gamache and Myrna as two executors when she was an outsider to their close-knit group in Three Pines?

After one of her beneficiaries is found dead in The Baroness’ dilapidated former home, Gamache is determined to find out more about the self-proclaimed royal and her family secrets.  The case of the Baroness runs parallels with Gamache’s fate in the drug raid and its consequences.  But, the Baroness is not the only one with secrets.  Gamache has secrets of his own that will be revealed when all the pieces fit neatly into place. 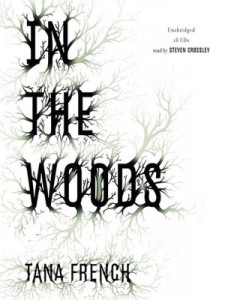 I recently listened to the audiobook version of Irish author Tana French’s debut mystery, In The Woods.  French thrusts the reader into a dual storyline – one past and one present – both inextricably linked by one man, Inspector Rob Ryan of the Dublin Murder Squad.  Twenty years before, Rob and his two young school chums made headlines when all three disappeared and Rob was later found alone exiting the woods without any recollection of what had happened to his friends –  the case has remained unsolved.

In the current case, Rob and his partner Cassie Maddox are assigned to a case involving the murder of a young ballet dancer, Katy Develin – a crime that was committed in the exact same spot as Detective Ryan’s incident twenty years prior (he changed his name from Adam Ryan due to the publicity of his case).  Katy’s family begins to exhibit odd and baffling behavior and it peaks the interest of the detectives.  Ryan and Maddox realize that someone close to the victim may be involved – but which family member knows more about Katy’s murder than they are admitting?

I am a big fan of mysteries and the ending of In The Woods was a shocker- I highly recommend it.