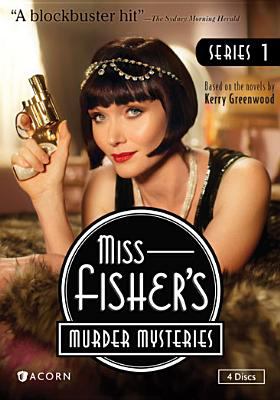 When I grow up I want to be a Lady Detective just like Miss Fisher—elegant, scrappy and clever (words that also describe my other favorite Lady Detective, Jessica Fletcher!) Phryne Fisher has been dancing around the book world for a while (see my review of the first in that series here: Phryne, Rhymes with Briney), but now we can actually see her shake her beaded tassels in a new gorgeously filmed television series by the Australian Broadcasting Corporation, shown in the United States on PBS.

Miss Fisher’s Murder Mysteries begins just as Kerry Greenwood’s book series does, with the Honorable Phryne Fisher, played by the seductive Essie Davis, returning to 1920’s Melbourne after being away for a decade or so. While she was away in Europe, Miss Fisher had modeled nude for artists, partied with dancers, worked as WWI nurse, and suddenly came into a title and money. Now that she is returned, Phryne decides that her charm and intellect are perfectly suited to solving murder mysteries around her old hometown. She enlists the help of her gentle butler, her communist chauffeurs/handymen, and her new maid, Dot, who finds herself constantly struggling between good Catholic values and the not-quite-legal-or-virtuous things that Miss Fisher persuades her to do. And of course, the local Detective Inspector Jack Robinson does not find Phryne’s frequent interference in his work amusing (even if he does find her annoyingly companionable.) I loved every episode of Miss Fisher’s Murder Mysteries, but what most puts a sparkle in my eye is Phryne’s marvelous wardrobe! The silk kimonos! The slinky wide-legged pants! And the hats oh THE HATS!

Miss Fisher’s Murder Mysteries is so charming, fun and sexy while still addressing many historically controversial issues such as abortion, homosexuality, and terrorism—all while giving us a cracking good whodunit. I highly recommend this series to fans of Downton Abbey, Call the Midwife, and those who love history and mysteries 😉 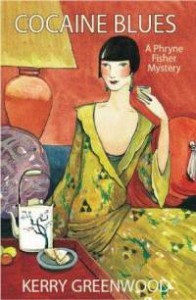 I had long been attracted to the fun and stylish covers of Kerry Greenwood’s Phryne Fisher series, and finally decided to give them a try when the Davenport Public Library’s new Youth Services Librarian, Liza Gilbert, told me they were some of her all-time favorite books. There was just one thing I needed to know before I curled up with the mystery series: how oh how do I pronounce the heroine’s first name?! A quick search online and I learned that “Phryne, rhymes with Briney” which is now stored safely in the corner of my brain right next to “Rowling, rhymes with Bowling.”

Phryne Fisher is the classic 1920’s saucy heroine; she has style, confidence, cleverness and unlimited funds to do with as she pleases, and apparently what she pleases to do is fly planes, outwit lovers, and investigate crimes. In Cocaine Blues, the first in her series, Phryne arrives in Melbourne, Australia to check on the condition of an English aristocrat’s daughter who had been writing worrisome letters home to her parents. Although she assumed her Melbourne visit would mostly involve watching a neglectful husband and testing the girl’s food for poison, Phryne quickly finds herself searching out heavyweight cocaine dealers and criminal abortionists (who are assaulting their patients and depositing them in taxicabs to die).

Despite the gritty, heavy subjects of these investigations, Miss Fisher still manages to wear fabulous gowns, make snarky conversation and have a sexy romp or two. Hurrah! My absolute favorite part about Kerry Greenwood’s writing was the fascinating setting of the growing city of Melbourne, Australia during the 1920’s. Since most of my favorite Twenties novels seem to take place in New York, Chicago or London, it hadn’t even occurred to me that other exciting locales were also having a roaring good time. I highly recommend the Phryne Fisher series to those readers who can’t get enough of bobbed haircuts, silk stockings and smart female characters.

Bad Behavior has blocked 1589 access attempts in the last 7 days.