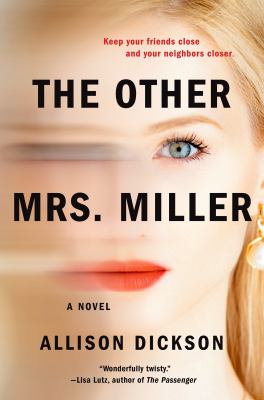 Do you ever have a feeling that people aren’t what they seem? That they are keeping something from you? This is the premise of Allison Dickson’s book The Other Mrs. Miller where a woman who hardly leaves her house becomes increasingly more suspicious of the people in her life.

The Other Mrs. Miller by Allison Dickson tells the story of two women watching each other and the consequences that follow.

Phoebe Miller hardly leaves her house. She doesn’t see the point. Living on a cul-de-sac affords her the opportunity to watch her neighbors in relative peace, so when a car starts showing up on a fairly regular basis outside of her house, she immediately becomes suspicious. Why does the driver keep showing up? What business could they possibly have on her cul-de-sac? Could they be wanting to get information out of her because of her family?

While Phoebe’s family may be infamous, Phoebe herself is uninteresting. She’s an unhappy housewife who has gained weight in the past couple years due to her love of ice cream and wine. Phoebe and her husband don’t get along very well with issues becoming more and more present every day. Not really knowing how to make things better with her husband, she keeps going on with her daily life knowing things will eventually work themselves out.

Phoebe is soon distracted when a new family moves in across the street. Drawn into their web, Phoebe finds herself wanting to know more about the Napiers: the doctor husband, the bubbly and energetic wife Vicki, and the handsome college-bound son Jake. Leaving her house to introduce herself to the new neighbors, Phoebe quickly finds the companionship she has been lacking with the Napiers. While she is enjoying having a new friend and is coming out of her shell more, Phoebe is growing more and more distracted from the things that she really should be paying attention to, like the car that’s been showing up outside of her house. Her life becomes more unpredictable, leading to a climax that will have readers on the edge of their seats.

This domestic thriller kept my attention from the beginning with secrets and plot twists popping up until the very end. Check out this book and let me know what you think in the comments!

Bad Behavior has blocked 1516 access attempts in the last 7 days.