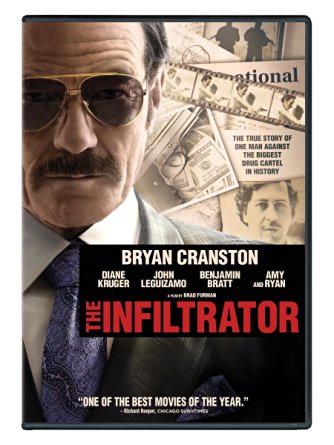 The Infiltrator starring Bryan Cranston, as well as several other well-known actors and actresses, is an American crime drama film that is based on the book, The Infiltrator: My Secret Life Inside the Dirty Banks Behind Pablo Escobar’s Medellin Cartel by Robert Mazur. Its basis on Mazur’s autobiography lends this movie a compelling fact-based story with a cast that both resembles the real-life characters and their mannerisms. This movie tells the story of the 1980s bust of Pablo Escobar’s money-laundering organization.

The Infiltrator recounts the story of Robert Mazur’s discovery of a massive money laundering scheme involving Colombian drug lord Pablo Escobar. Mazur, a U.S. Customs special agent, is up for retirement after being injured during his previous operation. He instead finds himself back undercover as “Bob Musella”, a wealth mob-connected businessman who becomes a pivotal player for a lot of drug lords who need help laundering their dirty money. He eventually infiltrates the Medellin Cartel, the world’s largest cartel, and discovers the vast money-laundering organization of Pablo Escobar, a massive and well-known drug lord. Mazur also succeeds in taking down the Bank of Credit and Commerce International, aka the BCCI, for their involvement.

This movie shines a light on the ethics of big banks and government, as well as all of the different players, organizations, and activities necessary to keep a massive undercover investigation from being discovered. Mazur’s journey to discovering Escobar’s money-laundering organization and its eventual takedown did not happen overnight. He started small and had to gain buy-in and trust from lower level drug dealers and suppliers in order to prove his worth. Mazur befriended dirty bankers, businessmen, and drug lords across the world as he spent years infiltrating the Medellin Cartel’s criminal hierarchy. This movie tells the story of how Mazur brought these criminals to justice and destroyed the bankers and businessman who were manipulating world-wide finance systems in order to benefit the drug lords, terrorists, and politicians who gave them their money.