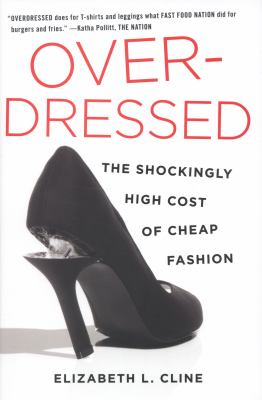 In Overdressed: The Shockingly High Cost of Cheap Fashion, writer Elizabeth Cline manages to educate the reader on the current state of the worldwide garment industry and to make it a page-turner. I COULD NOT PUT THIS BOOK DOWN. Cline covers the history of America’s Department Stores, the complicated ethics of a global garment industry, a trip to China’s factories for an experiment in fashion manufacturing, the effect of cheap clothes on the secondhand stores and charitable causes, and the role of social media in the “fast fashion” environment–all while unintentionally evolving herself into a “slow fashion” activist.

This is not a see-how-I’m-better-than-you-because-I-only-wear-handsewn-fair-trade-organic-cotton manifesto, but rather a conversation with a super smart friend who’s motto is I-used-to-shop-mostly-at-Forever-21-and-then-I-learned-some-stuff-and-now-prefer-not-to-shop-there. In fact, one of my favorite parts of the book is when Cline admits that only a few years before she began researching the book by sifting through her closet of cheap clothes from H&M, Target & Forever 21, she had participated in protests against her college for using sweatshops to produce their merch. If you were to ask me “Hey, are you against sweatshops and unfair labor practices?” I would say “Duh. Of course.” But then I would sheepishly look down at my clothing and have absolutley no idea how or where anything was made. It takes a lot of work not to buy cheap fasthion, and only Cline’s complete honesty, curiosity, and empathy could produce a book that could convince me to shop (a little bit) less at Target.

I highly recommend Overdressed by Elizabeth Cline to nonfiction readers, fashionistas, and fans of the slow lifestyle movement.