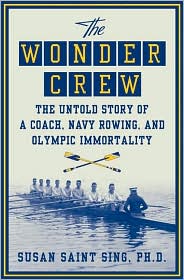 Led by a salty and unconventional coach, a team from the US Navy dared to go to the 1920 Olympics (held in Antwerp, Belgium) and challenge the privleged and long-dominant British at their own sport of rowing.

Set in the devastating aftermath of World War I, The Wonder Crew by Susan Saint Sing tells the story of Coach Richard Glendon and his ragtag team of Navy midshipmen using innovative training methods and a new style of rowing that revolutionized the sport. One by one they defeated the Ivy League schools, then turned their sights on the gold medal at the Olympic games.

Follow along this exciting journey from the humble beginnings of the crew and coach, through various obstacles overcome, the courage and commitment required and the tests endured, to the final triumph of this All-American team of underdogs. 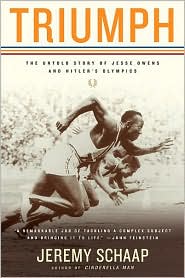 The 1936 Olympics, held in Berlin on the eve of World War II and under the shadow of Adolf Hitler, were in large part the story of Jesse Owens and his dominance on the track.

Born in Alabama, Owens’ athletic talent was recognized early. He became a star at Ohio State University where, in one of the greatest athletic feats ever, he equaled one and set four world records – in the span of one hour. Hitler’s plans to showcase the superiority of his Aran athletes on the world stage of the Olympics was spoiled by the Americans, especially Owens, who won four gold medals in track and field. Triumph: the Untold Story of Jesse Owens and Hitler’s Olympics by Jeremy Schaap takes you through Owens’ remarkable acheivements, the obstacles he faced and overcame, the political turmoil that nearly canceled these games, all with a vividness that puts you track-side throughout. 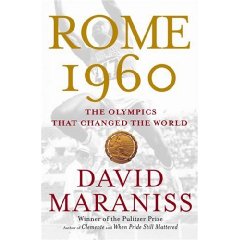 Setting the personal stories of the 1960 Olympics in the context of world events and issues, Rome 1960 by David Maraniss adds credence to the thought that the Olympics are a reflection of their time. 1960 saw, among other things, some of the first instances of illegal performance enhancing drugs, political unrest in the decision to make China enter the games under the name of Taiwan and tensions spilling over from the Cold War, the spotlight shining on the social injustices still felt by black Americans even as they became heroes to the rest of the world, and the practice of strict amateruism coming under scrutiny.

This was also the Olympics of Cassius Clay (soon to become Muhammad Ali), Wilma Rudolph (who overcame childhood polio to win gold) and Ethiopian marathoner Abebe Bikila who won gold while running barefoot.

The Opening Ceremonies of the Beijing Olympics will be held tonight; what insights into the state of our world will we see from China?