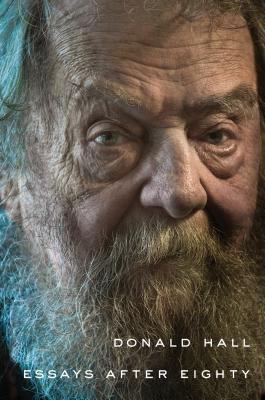 Let me first admit that the way I discovered this book was not when I placed it on my “to-be-ordered” list or when I stumbled upon it by happenstance in the library. Instead, I was talking about BookFace Friday. This event happens every Friday when librarians and other bookish people find books with people’s faces as the cover, pose with them as their actual face, and post pictures on their social media accounts. (Still confused? Check out the Instagram page for BookFace Friday.) As I was looking up examples to show, I found someone using this book as their face. I was instantly intrigued by the title and immediately wrote it down to order/read.

Donald Hall, former U.S. poet laureate, constructed Essays After Eighty as a way to describe for others the vantage point of life at very old age. The essays Hall has written for this collection intricately weave subjects like death, aging, being limited when you reach old age, traveling in foreign countries, honorary degrees, his love of garlic, and just what is actually important to you when you reach his age. Describing for readers his deep love for his home, the deceased love of his life, and how to deal with growing older are just some of the topics Hall broaches in this enduring collection. Hall extends back to his past in some essays describing scenes that stand out in his mind to the present where he spends his time at Eagle Pond Farm.

Be sure to check out this book to read more about Hall’s life as a biographer, children’s author, and as a human being trying to figure out how to deal with everything old age has thrown at him.