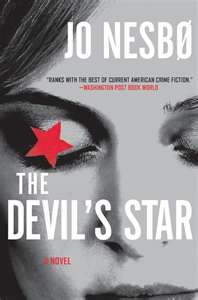 After reading Swedish authors Steig Larsson, Camilla Lackberg and Asa Larssen and becoming addicted to Scandinavian crime mysteries, I came across rave reviews about Norweigan author Jo Nesbo and decided to try one of his most recent books that has been translated into English.

The Devil’s Star begins simply enough with a small trickle of water that streams down the wall of an Oslo apartment.  The Devil’s Star continues to take the reader on twists and turns to a unexpected and thrilling end with a myriad of victims courtesy of one serial killer.  Each victim has a telltale sign left at the scene – a five point diamond near each of their bodies.

Detective Harry Hole, who is still reeling from the murder of his former partner, struggles both with alcohol and his new partner (and nemesis) Tom Whaaler on this case.  Hole is convinced Whaaler has something to do with his partner’s death.  To complicate matters, Detective Hole also struggles with his on again off again girlfriend, Rakel – which makes for more drama in the Detective’s life.

If you enjoyed reading Stieg Larsson’s Millenium Trilogy, give Jo Nesbo a try – his latest book to be translated into English, The Snowman, comes out in May.

Bad Behavior has blocked 2284 access attempts in the last 7 days.