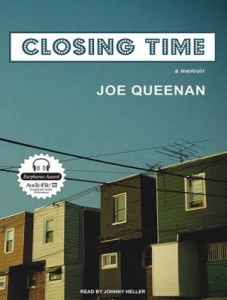 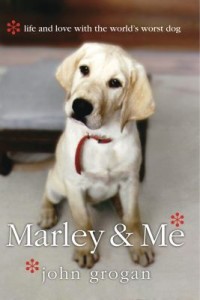 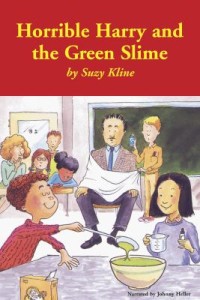 Local audiobook aficionados got an opportunity to hear a master narrator at work and to quiz him about his craft. Johnny Heller, award-winning narrator, actor and stand-up comic visited Bettendorf Public Library July 15th to read aloud and take questions from the audience.  A resident of Manhattan, he seemed genuinely interested in learning more about Iowa in general, and the Quad Cities specifically.

Heller is an interesting combination of  the highbrow (trained as a Shakespearean actor) and the low to middle brow (he delights in adolescent humor, which serves him well when narrating juvenile books). He read from several of his books (Marley and Me and  Dave Barry’s Complete Guide to Guys).

He gave several insights into the process. Most fascinating was how he chooses someone (an actor or actress perhaps) to pair with a character, so he can instantly call up that persona. When asked how narrators can seamlessly and quickly move between male and female characters, he says, ideally, he’s in a zone where he doesn’t consciously have to make those decisions. He doesn’t try to do “female” voices. it’s more about their character. He softens his voice for females but doesn’t go several octaves higher.

Other tidbits, he gets paid by the hour – the finished hour of product, not what he puts into it, so as an experienced  narrator, he’s more efficient and the ratio of time spent and actual output is more equal.

His favorite part of the job, though, is to foster the love of books and reading. Mixing with the crowd before and after, Heller clearly enjoys the extensive traveling involved in the job, and doing whatever he can to promote the appreciation of story, in whatever format it may be. 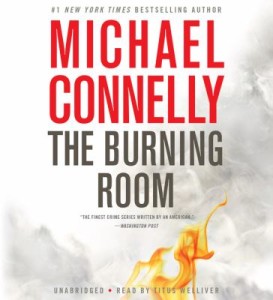 The audiobook of Michael Connelly’s latest (hopefully, not the last) Harry Bosch novel is brilliantly narrated by Titus Welliver. The Burning Room is enjoyable on multiple levels. First, there’s the evolving relationship between Harry and an assigned protegee, Detective Lucia Soto, as well as Harry’s internal monologues about the careerists in charge of the LAPD and the incredible talents of Welliver and, probably least of all, the actual plot.

Bosch grows into an ever more fascinating character; professional in that he cares first and foremost about solving cases, rather than the political implications of each and every action. He skewers the bureaucratic bluster in the guise of the bumptious Lieutenant Samuels, Bosch’s nemesis. As they investigate two entwined cold cases, Harry imparts his survival skills and hard-won knowledge to Lucy Soto, a smart and hard-working disciple. Will she carry the torch in future Connelly books?

There’s a fine balance in audiobooks when it comes to altering the reader’s voice between characters; they should be distinct enough that the listener can follow a conversation, but not so in-your-face that you’re brought out of the story. Welliver’s  gift is his ability to create, with consistent and subtle intonation, a conversation’s back and forth action. So much more efficient than “he said” and “Harry replied,” and “she shouted.”

His narrating work can be heard in several Robert B. Parker novels, while his acting can be seen in The Town, Gone Baby Gone, Twisted and Transformers. Age of Distinction. I’m sure acting is not easy, but reading aloud in such an intelligent and enjoyable manner must be even harder.

Bad Behavior has blocked 1413 access attempts in the last 7 days.