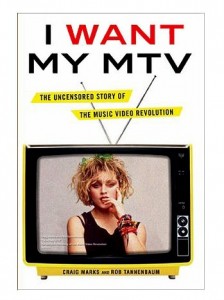 I Want My MTV is a dauntingly large book, but it’s easy to dip into at random. The only problem is, once you do, it’s hard to put it down. The compulsively readable book is made up almost entirely of interviews with rock stars, producers and early MTV promoters, talking about themselves and each other. And they don’t pull any punches, going into detail about the hard-living, hard-playing lifestyles of the day.

The beginnings of MTV were chaotic and anarchic – it was a new medium and there were no rules and no experts.  Everyone felt free to “put on a show,” acting out the lyrics of the song or indulging in their creative, inner artist.  The name of the game was speed, not quality control. Careers were made when their videos went into heavy rotation (Tears for Fears, Duran Duran,  Culture Club, Men at Work to name a few) and, simultaneously, some artists thrived only in radio. This phenomenon was described in the Buggles’ Video Killed the Radio Star – August 1, 1981.

Bad Behavior has blocked 1756 access attempts in the last 7 days.