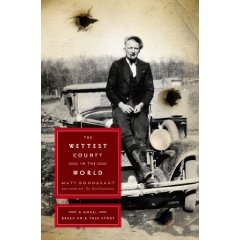 No, this has nothing to do with rainfall. Rather, the “wet” refers to moonshine.  The Wettest County in the World by Matt Bondurant, a fictionalized account about the real-life Bondurant brothers in Depression-era Virginia is gritty, gutsy and sometimes even gory.  It’s narrated primarily by the youngest brother, Jack, who is in fact, the grandfather of the author.  The author, Matt Bondurant, also enlists the help of  Winesburg, Ohio author Sherwood Anderson who started his own investigation (in 1934) of the brothers’ dramatic confrontation with the county sheriff.  In doing so, Anderson was the first to dub Franklin County the “wettest county in the world.”

The story begins in 1928 when a pair of thieves rob Forest Bondurant of his large stash of bootlegging money and end up cutting his throat.  Somehow he manages to reach a hospital 12 miles away.  Soon after, two anonymous men appear at the same hospital, one with legs totally shattered, the other castrated.  Needless to say, they aren’t talking. You get the picture — this is real roughneck country and the Bondurant boys are no angels.

Bondurant does an excellent job of imagining and portraying the probable lives of his ancestors.  It’s not always pretty, but it does give the reader a gripping view of their struggles to survive during Prohibition in the poverty-stricken foothills of westernVirginia.

Bad Behavior has blocked 1603 access attempts in the last 7 days.