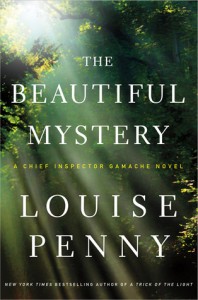 Award winning mystery writer Louise Penny is back with her eighth book in the Chief Inspector Armand Gamache mystery series.  The Beautiful Mystery is a bit of a departure (as far as the location) from her previous books, but it just as captivating and engrossing as her previous titles.  I hold a soft spot for Three Pines, the quaint and picturesque village where the previous books are located, and even though I was a little leery of the new setting, it is definitely another superb mystery.  The book takes place in a remote Quebec monastery where 24 monks live in complete isolation and silence.  Ironically, the rest of the world has just discovered this group through their voices and a recording of their haunting and beautiful chants that have been released to the world with rave reviews.

The Beautiful Mystery opens with the shocking murder of one of the monks, Frere Matthieu, the choirmaster of the group.  Matthieu has been a champion of releasing the chants to the world in order to raise much needed funds for improvements to the monastery. Chief Inspector Gamache and his right hand man, Jean-Guy Beauvior arrive on the scene to interrogate and question the monks, attempting to piece together the puzzle of which of the remaining monks could possibly commit murder.  In addition to solving the crime at the monastery, Gamache and Beauvoir confront personal issues and demons that could have the ability to tear apart their own lives.

The Beautiful Mystery is intriguing enough on its own but if you want to start with the first book in the series pick up Still Life.

Bad Behavior has blocked 1330 access attempts in the last 7 days.